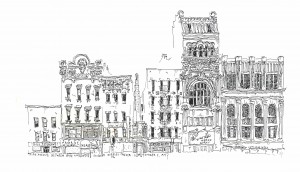 To all our Members and Friends,

As we wrote during the summer, Defenders was horrified to learn of the proposal to destroy the charming garden on 70th Street, designed by the renowned English landscape architect Russell Page, and replace it with a tower of about 120-130 feet.  We have been working to find an alternative solution with residents of 70th Street and the newly-formed group, Unite to Save the Frick. We’re glad to say that more and more organizations and individuals are joining this campaign and hope that all Defenders who share our position will sign the petition; the link is   https://www.change.org/p/tell-the-frick-withdraw-your-destructive-plan

The November, 2014 calendar of landmark and land use issues for the Upper East Side is attached.  The following addresses are on this month’s list:

696 Madison Avenue – Upper East Side Historic District
CERTIFICATE OF APPROPRIATENESS
A neo-Grec style residence designed by J.H. Valentine and built in 1878-79. Application is to legalize the installation of storefront infill and cladding without Landmarks Preservation Commission permit(s), replace a awning and to install heat lamps.
This application was approved with modifications.

45 East 66th Street – Upper East Side Historic District
CERTIFICATE OF APPROPRIATENESS
A neo-French Renaissance style apartment building with Gothic style elements designed by Harde and Short and built in 1908. Application is to construct a rooftop addition.
This application was postponed to Nov. 18.

990 Fifth Avenue, AKA 1 East 80th Street – Metropolitan Museum Historic District
CERTIFICATE OF APPROPRIATENESS
A neo-Classical style apartment house designed by Rosario Candela and built in 1925-27. Application is to alter window openings and replace windows.
This application was approved with modifications.

111-113 East 73rd Street – Upper East Side Historic District
CERTIFICATE OF APPROPRIATENESS
A Modern style building designed by Brown, Lawford & Forbes and built in 1962. Application is to alter the front façade of 113 East 73rd Street.
No action was taken on this application.

1010 Park Avenue, AKA 1010-1012 Park Avenue – Park Avenue Historic District
CERTIFICATE OF APPROPRIATENESS
An annex to a Gothic Revival style church designed by Merrill & Homgren and built in 1960. Application is to demolish the building and construct a new building.
No action was taken on this application.

Landmark and Land Use Issues for the Upper East Side

The following items will be heard at the Landmarks Preservation Commission on Tuesday, November 18, 2014 in the Municipal Building, 1 Centre Street, 9th floor conference room (subway stop: Brooklyn Bridge, #6) at 9:30 AM:

39 East 72nd Street, aka 39A East 72nd Street – Upper East Side Historic District
CERTIFICATE OF APPROPRIATENESS
16-2658 – Block 1387, Lot 25, Zoned R10
A rowhouse with neo-Grec style elements designed by Robert B. Lynd and built in 1881-82, and subsequently altered in 1905 by William Strom. Application is to alter the façade and areaway and to construct a rooftop addition.

The following items will be heard at the Community Board 8 Landmarks Committee Meeting on Monday, November 17, 2014 at Lenox Hill Hospital, 310 East 77th Street, Michael-Bruno Presentation Room, at 6:30 pm:

713 Madison Avenue (between 63rd and 64th Streets) – Upper East Side Historic District
Neo-Grec style rowhouse designed by Charles Baxter and completed in 1877. Application is to install a new storefront.

The following item will be heard at the Community Board 8 Land Use Committee Meeting on Wednesday, November 12, 2014 at New York Blood Center, 310 East 67th Street, Auditorium, New York, NY at 6:30 pm:

Public Hearing: BSA Cal No. 260-14-BZ, 100 East End Avenue, Block 1581, Lot 23, The Chapin School-Application pursuant to Section 72-21 of the Zoning Resolution of the City of New York, as amended to request a variance to permit the construction of a three-story enlargement to the existing school at the premises, which is contrary to the previously-approved plans, floor area, rear yard, height and setback requirements.

Because items are often withdrawn or laid over, it is advisable to telephone the Community Board office – (212) 758-4340 – or the Landmarks Preservation Commission – (212) 669-7923 – a day ahead of time. It is also advisable to inquire about the approximate time that the item of interest is expected to be heard.

This entry was posted in Uncategorized. Bookmark the permalink.