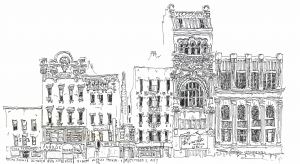 Defenders of the Historic Upper East Side is currently involved in three campaigns.

· The Frick Museum wishes to expand by destroying the 70th Street garden, designed by Russell Page, and replace it with a 110-foot tower. We are working to persuade them to find a less damaging way to achieve their needs. If necessary, we will oppose them during the official approval process.

· The Park Avenue Christian Church and a developer wish to demolish the Gothic revival Parish House and build a 200-foot residential tower in its place. We are working to persuade the Landmarks Preservation Commission to deny the Application.

· There is a proposal to build a 450-foot, medical tower on a narrow, dead-end street where a Sanitation Department garage was formerly located. At the same time, the city proposes to build a new Sanitation Department garage on a site in the east 20’s that is currently used for medical purposes. The neighbors of each proposal want to keep the current uses, which we consider suitable, while the proposals are not. We are working to help the neighbors prevail.